Dog Art History: From the Ancient Past to the Present 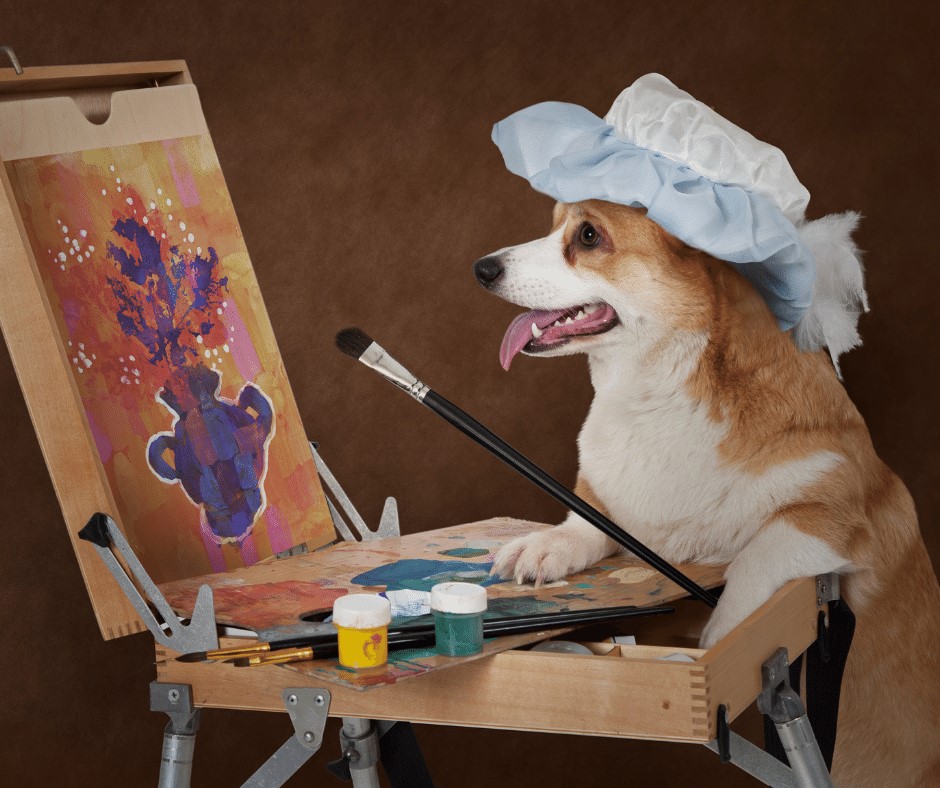 Curious about dog art history and how man’s relationship with dogs has evolved through the years?

Animals are often used as muses for all kinds of artistic work, with dogs as one of the most popular subjects.

With canines as living symbols of loyalty, protection, and unconditional love, it’s pretty easy to see why man’s best friend is exceptionally involved in the history of visual art.

So, in this article, we’ll walk you through dog-related artwork to satisfy your artistic curiosities.

Artists have shown their respect and admiration towards canines for thousands of years already by painting or carving the likeness of these loyal companions on various mediums.

Dog art in the B.C. period

In fact, artworks with dogs as subjects can be dated back to ancient times.

One example is a mosaic of a fierce-looking dog that was found in the “House of the Tragic Poet” in Pompeii.

The mosaic itself has an unknown birthday, but the house was built around the end of the 1st century B.C., which means that the mosaic should be made for at least as long.

The mosaic has these words at the bottom: “Cave Canem”, which translates to “beware of the dog”. This statement is widely believed to alert visitors of the dog in the house rather than warn that the dog might attack.

Dog art in the A.D. period

Gavin Hamilton, a painter and art dealer, excavated the artwork called “Marble Statue of a Pair of Dogs” in a place aptly-named as the Dog Mountain.

The British Museum claimed the sculpture was not dateable, but they were produced around 1 A.D. to 199 A.D.

Dog art in the Renaissance period

The companionship of dogs was even documented in art during the Renaissance period. Many royalty and upper-classmen were painted with their dogs at their side or on their lap.

A famous example is “Portrait of a Noblewoman”, which was painted by Lavinia Fontana around 1580.

The painting depicts a young Bolognese noblewoman who just got married. The dark background and the deep red dress of the noblewoman made her small dog stand out.

Breeding dogs were then standardized in the 18th century, which led to dog portraits where pooches were the focus.

Paul Gauguin, an important historical figure in the Symbolist movement, put a twist in the long-standing tradition of still life painting when he painted “Still Life With Three Puppies” back in 1888.

One of the most well-known collections of dog paintings soon then followed —“Dogs Playing Poker”.

This iconic series, painted by Cassius Marcellus Coolidge, started with the “Poker Game” in 1894, leading to 16 commissioned oil paintings for a cigar advertisement in 1903. The last of the series was then made in 1910.

His paintings that featured dogs playing poker continued to pop for decades in contemporary culture. They were so well-known that they cemented dogs as viable subjects for art in the modern era.

This shift from being an extra to a star in paintings led to various dog arts, including realism and abstract.

George Romney was an 18th-century superstar at the start of her career. She was a first cousin of Mitt Romney’s great-great-grandfather, who failed as a Republican presidential candidate.

In her “Lady Hamilton as Nature” (1782), George painted the then 17-year-old Emma Lyon, who rose from being a humble blacksmith’s daughter to the mistress of some of Great Britain’s richest men.

Some records claim that she was nakedly dancing on a table in a week-long men-only party at 15.

Lyon eventually married Lord Hamilton, who tried to educate her in literature, music, and social refinement. In the painting, she looks just like a pampered young noblewoman accessorized with a lap dog and who had no history of humble upbringing or scandalous behavior.

The murals are pretty disturbing, and this one, in particular, is said to show the inevitability of death. The dog, who’s glancing nervously upwards, gives the idea of a relatively featureless seascape.

Although it’s not as gruesome as the rest of de Goya’s black paintings, the “Half-Submerged Dog” is still unsettling, with different, dire interpretations. There is an expression of apprehension and pathetic hope, which adds to the foreboding atmosphere.

Joan Brown is a part of the Bay Area Figurative movement’s 2nd generation and is best known for her autobiographical creations. Her “Noel in the Kitchen” (circa 1964) shows her son Noel toddling in her kitchen.

The painting is a surprisingly touching slice-of-life that’s completely unpolished yet remains relatable to the ordinary viewer.

The floor seems dirty, the counter is piled with dishes, and Noel’s bare buttocks are falling while he leans towards the sink and is being guarded by their dogs.

It’s easy to imagine that the young boy is trying to sneak a treat from the kitchen counter and is being watched over by the two dogs as his partners in crime. With the domesticity of the scene, the painting has quite a sense of timelessness about it despite the fact that it’s already over 50 years old.

The iconic flower puppy does not only represent the universal appeal of flowers and puppies, but it also depicts the formal topiary plantings of 18th-century gardens, kitschy Chia Pets, and dog breedings.

The 43-foot-tall West Highland White Terrier, filled with an internal irrigation system, also made its appearance at the Museum of Contemporary Art in Sydney and the Rockefeller Center of New York.

A version of the dog art is also permanently guarding the entrance to the Guggenheim Bilbao, while another version is keeping watch over the backyard of collector Peter Brant in Connecticut.

One thing that’s fascinating about the “Feast in the House of Levi” (1573),  an 18- x 42-feet canvas painted by Paolo Veronese, is that it attracted the censure of the Inquisition.

This rendering of the Last Supper raised objections over the presence of drunks, jesters, little people, and Germans in this sacred meal.

In fact, Veronese was called in for a trial, with charges of indecorum and irreverence. He also narrowly avoided official accusations of heresy.

The Inquisition also saw the presence of the large dog as problematic for some reason, but Veronese got away with it by changing the name of the canvas to what it is known now.

Veronese was told to replace the dog with Mary Magdalene, but he stood his ground, saying that the saint’s figure would not look good there.

Some call Veronese the Ai Weiwei of his day since he did not repent for his untraditional rendering of the sacred event in the Bible. He didn’t even back down amidst the surge of religious critics telling him to change the contents of his artwork.

Huntington was a prominent American sculptor who loved animals. As a matter of fact, many of her works capture the unrestrained behaviors of several animals.

Some of her well-known works include the two life-sized Great Danes, a sculpture she cast in bronze and called the “Pair of Great Danes” (1907). In 2014, the Museum of Fine Arts in Boston conducted a naming contest to name each Great Dane.

David Hockey, one of the most influential British artists in the 20th century, turned to his pet dogs Stanley and Boodgie for some artistic inspiration back in September 1993.

He readied canvases around his house to be ready to get to work whenever his dogs plop down to take a nap.

He soon made an impressively large artwork featuring his pets, which he later exhibited in 1995 at the 1853 Gallery in the U.K. He even based his 2006 book entitled “David Hockney’s Dog Days” on it.

Gustave Courbet’s “Hunting Dogs With Dead Hare” is just one of the many paintings depicting dogs in the Met collection, although it does stand apart from others.

This artwork depicts these hunting dogs as feral, different from the usual loyal and cuddly lap dogs pictured in most dog arts.

Courbet’s painting reminds us that while adorable, man’s best friends may still harbor baser instincts and may not always be so friendly.

Ai Weiwei is a dissident Chinese contemporary artist well-known to be under detention in 2011 by the Chinese government for being openly critical. However, he continued to show his works abroad.

His work on the “Circle of Animals” (2010) became his first central public sculpture with installations in New York, Los Angeles, Houston, London, and other cities.

The installation was a series of 12 pieces of four-foot-tall bronze animal heads situated atop a narrow pedestal. They were all based on 18th-century sculptures made by Jesuits to make a fountain clock in the Summer Palace of Beijing for the Manchu Emperor Qianlong.

However, the British and French troops looted the Summer Palace during the Second Opium War in 1860. Only seven of the heads were recovered, so Ai Weiwei still had to imagine the original dog head when making this installation.

The role of dogs in art has risen from being a sideline character to being the focus of various masterpieces.

These artists and their artworks prove that our relationship with dogs is so unique that it is even well-recorded in history.

Are Dog Shirts Bad for Dogs? The Pros and Cons

World Rabies Day as a Pet Holiday: Busting the Common Myths About Rabies

7 Ways to Incorporate Stylish Dog Decor into Your Home 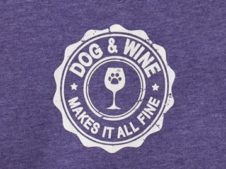 Dog and Wine Makes It All Fine (V-Neck T-Shirt) 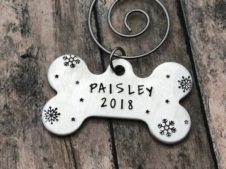